From our good friend Chuck Waggy up in West Virginia we present you with an eastern spotted skunk vs. black bear interaction caught on camera near a spotted skunk den.  Be sure to turn your volume up for the full Jurassic Park effect!

Amongst the backdrop of a global pandemic and associated trials with conducting field research in 2020, the loss of  >50% of our spotted skunks to canine distemper virus in April, and the otherwise difficult nature in keeping track of these cryptic critters, we get some good news from our study in North Carolina that life does go on and some females do successfully give birth and add to our growing knowledge of spotted skunks...


Videos by Greg Detweiler
Posted by David_Jachowski at 1:04 PM 2 comments:


Eastern spotted skunks are elusive and rare small carnivores, making observations of their behavior in the wild very difficult to capture. This makes the video below an amazing window into their secretive lives. Jay Keller recorded this 2-minute clip of a presumed mother and kit in Boca Raton, Florida. During the unusual daytime video, the pair are observed foraging for insects in the leaf litter. At 38 seconds into the video, the mother captures and shares a scorpion with the kit. Scientists have previously observed spotted skunk mothers bringing food items to kits at den sites. However, the video confirms that mothers also bring kits along on foraging trips. This helps kits learn what to eat and how to forage effectively. Citizen scientists like Jay are critical in gathering information on our natural world. An easy and fun way to contribute your sightings and observations is through iNaturalist. The Eastern Spotted Skunk Cooperative Study Group curates an iNaturalist page for submission of species sightings. Skunk observations collected through iNaturalist are helping scientists better understand the distribution of this rare species across its range.

Call for Papers
Eastern Spotted Skunk Special Issue of the Southeastern Naturalist
The Eastern Spotted Skunk Cooperative Study Group (https://easternspottedskunk. weebly.com/) and the Southeastern Naturalist (https://www.eaglehill.us/programs/ journals/sena/southeastern-naturalist.shtml) are teaming up to create a special issue publication focusing on Eastern Spotted Skunks (Spilogale putorius).
Any topic related to this species will be considered for publication including but not limited to reviews, original research, survey findings, conservation and management efforts, and natural history notes from across the entire range.
Abstracts of proposed topics (limited to 300 words and also including title, authors, and affiliations) are due by February 28, 2020.
Notification of abstract decisions will occur within two weeks of the deadline. Manuscripts of accepted abstracts will be tentatively due in summer 2020. Final manuscript acceptance is dependent on a successful peer review process overseen by the Southeastern Naturalist. Authors are responsible for page charges ($40 per published page). Expected publication of the special issue is 2021.
Send any questions or your proposed abstract to: Dr. Andrew Edelman at aedelman@westga.edu 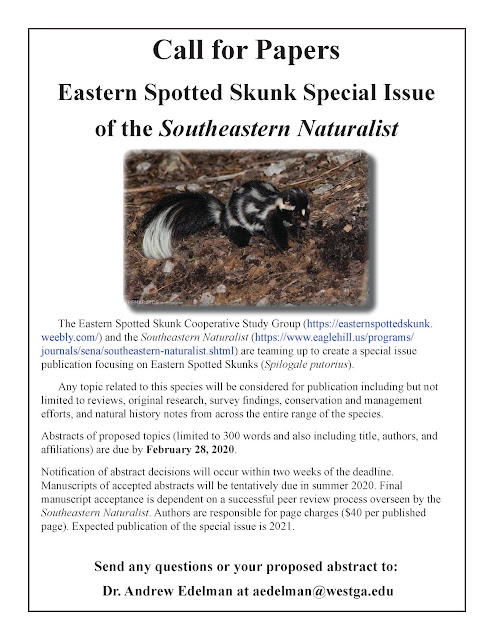 We still have a poor understanding of why eastern spotted skunks have declined in many states, particiularly the midwestern US.  Emmett Polder, a naturalist who taught at Loras College in Dubuque, Iowa, shared some initial thoughts with Dr. Matt Gompper before his death in 2009.

While over a decade old now, his ideas and observations still reflect the current uncertainty spotted skunk experts have over the biology and conservation of this species. 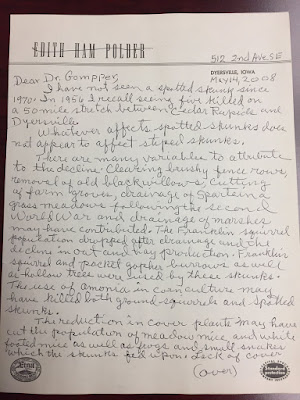 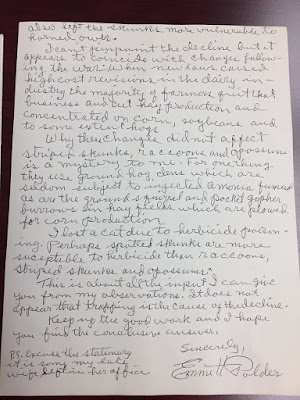 Spotted skunks can dig their own dens

Then a few days later, he saw a weasel using that same burrow!  Certainly a rare sighting and not something we have heard reported before.


Greg's observation occurred in North Carolina as part of a multi-year study of the species by researchers at Clemson University. 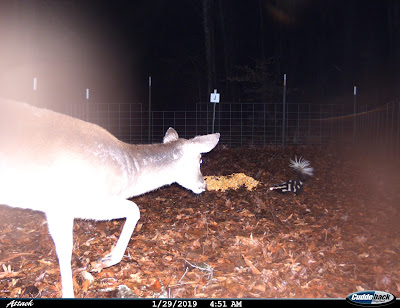 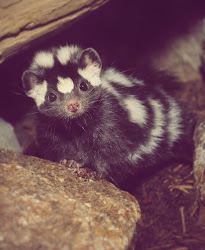